from Grown Ups Are Talking by Magnum Opus 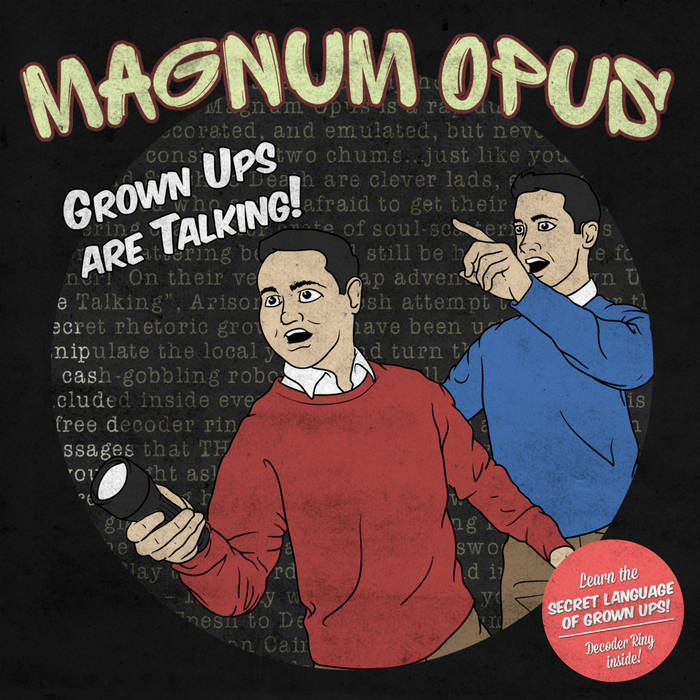 Ms. Subterfuge is looking damn cute in her gutter-proof, laced-up butter-pumps, jonesing for that Jack Johnson uppercut that’ll never come. She better learn it while she’s young – most shit is better left unsung. Most shit is dead and done by the time it hits the tippy-t of her bumpy tongue. That mistletoe misanthrope loves to cut a rug, if she can muster up the guts to show her washed out, mascara smeared mug in the club. This ain’t how it used to be in 1991, growing up under the thunder of a vibrant summer sun. Gun powder in her lungs. It was loud, and it was love. Madonna on the boombox. Vodka in the punch. And she said, “this isn’t what I wanted to become, stumbling in at one, and staring in the mirror while I’m drunk.” She’s always staring in the mirror while she’s drunk. Don’t wake her up. She’s done.

Back when he was just a bratty little Brooklyn kid, wiping off the puke-warm spittle from his crooked chin, never crossed his grin he’d be sweating getting booked again, “Shook Ones” bumping from the boosted whip he took with him. Oozing through the New York City sewers that he’s cooking in, four horsemen on his rotting corpse like something out a book he read. ‘Til they get their dang old fang, chains, and hooks in him, he’s two fingers up, bucked chest, “fuck the working man!” How’s that fucking working, man? He holds on with his Holy Ghost and swerves it like he’s worth a damn, but he’s not. Oh, well, yo, ain’t nobody perfect, and he’s too busy short circuiting to hear the siren circling.

I got nothing to say, but I still want to say it. Guido Anselmi vs the eight hour day shift. Would you tell me if I wasn’t gon’ make it? Chasing bank statements. This “Get Poor” shit? It’s so fake, kid. Face it. I gotta put myself back together. Stitch this track together, I mean, just get my act together. When it all airs out, we can laugh together. So I jump, jump, jumped, missed the jump off, now I’m up nights, dovetailing with the floodlights, drunk and screaming “thug life,” bluffing like a dozen IQ points above y’all. This American Fuck-All still sings love songs. Still means nil but a handful of brag tracks. Mag Op is mad dope. Do I really back that? Mean mugging sad sack. God Plot in the trash bag. Time to recalibrate, rebuild, and get past that.

Magnum Opus is a rap duo like no other! Celebrated, decorated, and emulated, but never replicated, the group consists of two chums...just like you! Arison Cain and Spesh to Death are clever lads, emcees of the illest breed who aren't afraid to get their fingers dirty delivering crate after crate of soul-scattering flows over bone-shattering beats, and still be home in time for dinner! ... more

Bandcamp Daily  your guide to the world of Bandcamp